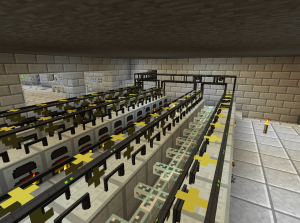 I think the next big minecraft content pack is going to be technology. To avoid some problems larger mod packs have with power systems and tech packs we’ll be limited to Redstone Flux (RF) based (or compatible) mods. The mods contained in this pack (with the exception of Steve’s Carts) act either as utility mods (like projectred adding better redstone circuitry, or gravestones allowing corps retrieval) or as an alternative to the Thaumcraft magic system already in place. Using these mods you can create complex systems that can automatically build objects, mine, or even move entire buildings from one place to another. You can create mech-like suits to wander around in or build large-scale computerized fabrication plants. Or you can simply use them to sort materials or make storage easier to manage. Using steves carts rails take on a whole new life. you can make “work trains” that can dig tunnels for you, lay track, build bridges, or just carry you as a passenger while you control speed and direction.

A pack like this adds a LOT of things, all at once. Here is a list of the player-facing mods that would be included. I’m still working out the details, and it is subject to change.