Quarries are one of the most efficient ways of gathering materials in this minecraft setup. They require RF (redstone flux) power to run and are capable of digging very large pits. This is the actual quarry setup I use in game. The quarry is on the left with the red/green lights on it. On top of it is a normal chest. Next to it, a nullifier and next to that a dimensional transceiver. item conduits are from the chest to the nullifier and DT and power conduits run from the DT to the quarry in the front. The nullifier’s enderIO connection has a filter on it, shown as the second image. 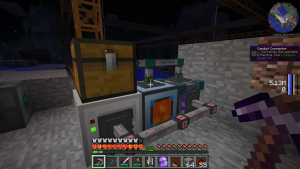 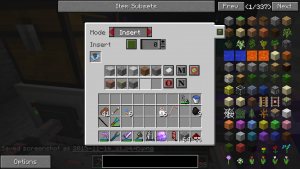 Using this setup my quarry sends all the non-garbage materials back to my base automatically and gets power from the central power system. You can set the size of a quarry using landmarks. the landmarks must form 3 parts of a rectangle (with 90 degree angles). you then right-click the mark with at the 90 degree angle if they were a triangle and it will form a red rectangle if you did it right (see images). 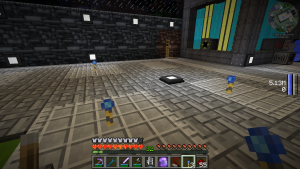 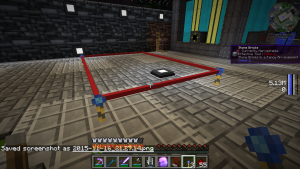 You can then place the quarry block right in front of that landmark and it will form a warning cube which once powered will build the quarry and start mining. The quarry will spit the materials it gathers out the top, so be sure you have the chest and such setup before you add power.

You may also power a quarry with sterling engines, right at the quarry. It will run slower as each block requires a specific amount of power to break depending on how hard it is, but it will still run.